7 Powerful Features That Will Enhance Your AWS Auto Scaling Schedules

Zero to Hero: Understanding AWS for the Junior Developer 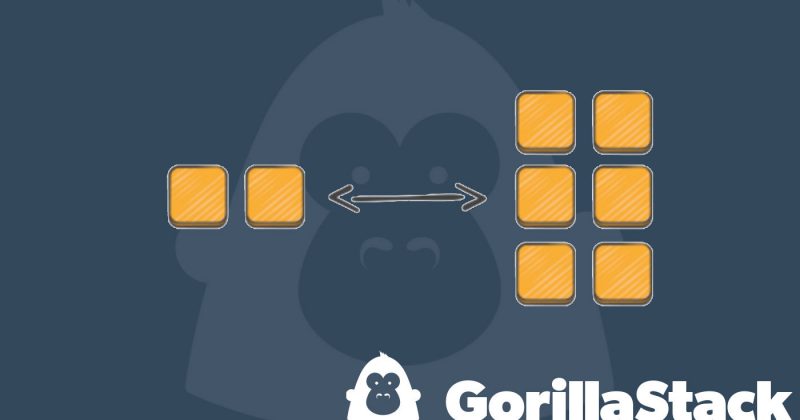 At GorillaStack we know a thing or two about scheduling changes to your AWS configurations – in fact we’ve had a product that schedules Auto Scaling groups for some time now. We’re excited about this AWS announcement – we’re in the space of making the cloud easier and we welcome anything that helps our customers to make simple configuration changes.

Our view is that Scheduled Auto Scaling has always been a great concept – so we spoke to our users, discovered what they wanted and took it 7 steps further than the current Auto Scaling Schedule console offering with our more robust Power Scale product.

Here are 7 of the key considerations for our users:

Most serious AWS users want to configure multiple regions with the same schedule, particularly when most of your IT workforce resides in a single location. The AWS console, by design, requires that you treat each region independently.

By contrast, the Power Scale interface allows users to go in and change any number of regions with one easy drag and click configuration. Our current data suggests that this is a far more common use case as companies continue to leverage Amazon’s global reach with their groups set up in a number of regions.

As with regions, the AWS console requires that users set up individual schedules for each Auto Scaling group.

We mostly find that users want to treat a number of their groups in the same way – that’s why we chose to allow users to configure multiple groups with the same schedule, it’s simple.

If a user’s grouping requirements are even more complicated than the above, or likely a combination of the 2, it’s going to be particularly troublesome to manage the configurations from the AWS console – and even more so as they draw closer to the 125 configurations per group per month limit.

Power Scale simplifies this process considerably by allowing users to schedule by tag. The likelihood is that a company who is scheduling configurations across multiple groups has already given each of them a common tag for administrative purposes. Simply then, it’s just a question of identifying that tag from within the Power Scale interface and scheduling changes.

Every so often your scaling requirements change, perhaps for a big sale event or a public holiday. If the console is your preferred interface, you can go in and make an amendment, but that of course involves resetting it after the event which is a little cumbersome. If you don’t mind using the CLI you can go in and make one time changes. We feel that it’s more gracefully dealt with via a snooze or cancel mechanism.

Using GorillaStack, you can snooze or cancel an scheduled configuration. Better still you can even do it from within one of your preferred communication tools – email, HipChat or Slack. Once done, the schedule will continue as normal, meaning no need to revisit and reconfigure for a 2nd time. 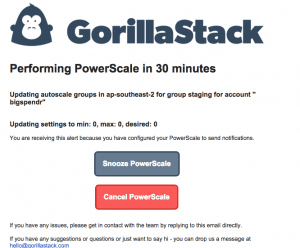 5. Rich Integration with Slack and HipChat

Most companies these days are using chat tools to manage their devops processes. That’s why we built out a powerful HipChat and Slack Integrations for Amazon Web Services. You can get alerted of any scheduled changes and choose to adjust them within your app. You can also predefine how far in advance of a change you receive that warning – giving yourself just the right amount of time to react to change and manage suitable adjustments. That’s not even to mention that you can also get warnings via SMS or email.. we want to be there for you wherever you want us.

The AWS Console limits you to 125 schedule changes per group per month. That’s about 4 a day, which can be quite limiting if you have to undertake so many changes for what GorillaStack can handle in just 1 configuration.

With GorillaStack Power Scale, we only limit you by your subscription – and we don’t mind saying we’re always keen to have a chat if you think you need more than what you’re currently getting!

7. Schedule in Your Local Timezone

The AWS console requires that you schedule using UTC timezone. In one respect that’s great for consistency, but when you’re scheduling many times across multiple regions it requires repetitive calculations that have significant risk if they’re not done correctly.

Using GorillaStack, you can schedule in any timezone, meaning you may choose to use your own or the region that you plan for your schedule to effect. This removes a considerable chance of error and makes things just that little bit easier.

We love AWS and we love their product enhancements. Scheduled Auto Scaling may be a good solution for very simple requirements, perhaps for the user who wants to set and forget. Even then, it would be wise to be aware of potential unwanted surprises that come about as a result of the inevitable complexity of the slightly more rigid region, group and tag configuration requirements that are part of the console. Add to that the lack of SMS / email warning and no chat integration, and even the simplest of setups means that you will have to be constantly vigilant to really make Auto Schedule via the console work.

At GorillaStack, we’re obsessed with making the cloud easier to use – you may want to give Power Scale a go. Why not have a go at the free trial to get a feel for the added convenience, security and peace of mind that GorillaStack can provide your AWS environment.